It's easy to stay motivated for the first week, and I'm hoping that if I keep writing about what I'm managing to cross off my list I'll find it easier and easier to keep going. So, I'll quickly touch on all the progress I've made in the first week of January!

Books - I read five books this week: The Namesake, Talking With My Mouth Full, by Gail Simmons, The $100 Startup by Chris Guillebeau, The Vegetarian, by Kan Hang, and Half Broke Horses, by Jeannette Walls, which I'll review soon. I also picked up a book of Emily Dickinson's poems to get started on that goal, so good progress on all of these!

Cooking - I actually did really well this week, I made four new recipes, most of which I was really happy with! Last night I made Tomato & Bean Soup in my new Dutch oven, and it turned out quite well, plus, as a project, I made baguettes to go along with them! 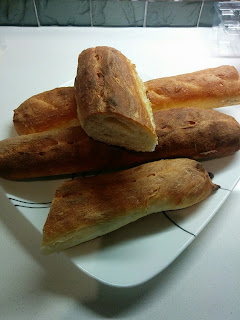 It was my first project cook of 2017 and I'm really glad I did it! They aren't much to look at, but they taste great and are pretty much exactly what I hoped for, so they were a perfect accompaniment to the soup. A very successful cook day and project to start things off!

Television - I made some progress on my Netflix queue, including watching half of Chef's Table: France and finishing Jimmy Carr's special last night. That's one thing off the queue, and most of the way to another!

Everything else - Not surprisingly, I have yet to watch a movie, finish a game, or get to a live show this year. Fortunately, there are 51 more weeks to get to those!

Other - I'm still planning to write about these later, but I decided to set two daily goals for 2017, using the daily habit tracker from Elise Joy (because there's nothing quite as satisfying as colouring in those little bubbles!). The first is to write every day, which I have successfully kept up so far. The other is to actually put away my dry dishes every morning - I have a terrible habit of washing the dishes and then leaving them to dry in the sink for a week, which means I can't wash any more dishes, which makes my whole kitchen a hazard zone. So far I've been keeping it up, which means my entire kitchen gets a clean sweep basically every day! It's working pretty well, and I hope I don't get lazy with it too soon.
Posted by Victoria at 11:27 AM

Victoria
Victoria is a scientist turned accountant. She loves numbers (obviously) and metrics, and likes to use them to write about her goals, financial and otherwise.